BaseLaunch wants to bring the best healthcare start-ups to Basel 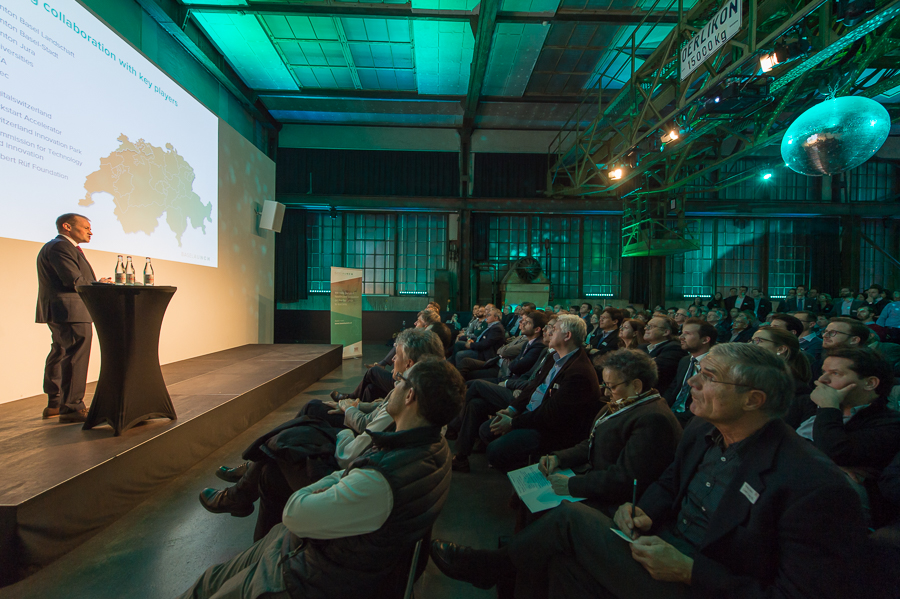 “If we invest billions in university research, then this remains an abortive effort if we do not make sure at the same time that these scientific achievements also result in value added – and in Switzerland, not elsewhere,” said Christoph Klöpper, CEO of BaselArea.swiss, on the launch of BaseLaunch, an accelerator programme for healthcare ventures initiated and operated by the innovation promotion and economic development of Region Basel.

In front of 250 guests from industry, research and the start-up scene, Domenico Scala, president of BaselArea.swiss, opened the launch event with the declaration that Switzerland – with the Basel region as its industrial motor – is far from exhausting its major innovation potential in the field of healthcare and life sciences. Scala spoke of a “mismatch” between the importance of the life sciences location and investments in start-ups. According to figures from the consulting firm Ernst & Young, just USD 381 million was invested as venture capital in biotech start-ups in this country. In the UK, whose life sciences cluster is only half the size of Switzerland’s, over double that amount was invested with USD 884 million. In Switzerland, money goes towards innovation and risk capital more sparingly than elsewhere, said Scala.

The assessment that there is still potential in Switzerland for start-ups is clearly shared by the industry partners of the accelerator programme. In addition to Novartis Venture Fund, the industry’s two other global champions are supporting BaseLaunch from overseas: Johnson & Johnson Innovation as well as Pfizer. Said Anja König, Managing Director of Novartis Venture Funds: “We are pleased to help energise the Basel region’s centre of gravity for European healthcare ventures, offering start-ups the support they need to accelerate their ideas.”

In the words of Uwe Schoenbeck, Chief Scientific Officer, External Research and Development Innovation & Senior Vice President, Worldwide Research and Development at Pfizer, supporting start-ups fulfils an important task for the entire industry: “Through Pfizer’s support of BaseLaunch, we hope to advance the pace at which promising science is translated into potential medicines.” And Richard Mason, Head of the Johnson & Johnson Innovation Centre, wants to create with BaseLaunch “an optimal environment for start-ups that focuses on supporting transformative science and great ideas in Switzerland”.

Alethia de Léon is responsible for seeing this through. A native of Mexico, she brings a wealth of experience to this new role. She was Head of Search and Evolution, Business Development and Licensing for Neuroscience Business at Novartis until 2015, before founding her own start-up Senes Sciences. For de Léon, the ambition is clear: “BaseLaunch seeks to win Europe’s best start-up projects for the region,” as she said in an interview in the Innovation Report.

BaseLaunch is involved at a national level as a vertical of digitalswitzerland’s Kickstart accelerator programme. While the programme in Zurich focuses on robotics, food and fintech, BaseLaunch is responsible under the aegis of BaselArea.swiss for the Swiss-wide start-up support in the healthcare sector. And networking with the Switzerland Innovation Park is secured: the second phase of BaseLaunch’s programme will take place in the Innovation Park Basel Area in Allschwil in the canton of Basel-Landschaft. Apart from support from the canton Basellandschaft, Basel-Stadt and Jura, BaseLaunch is also supported by the Federal Commission for Technology and Innovation (CTI) and the Gebert Rüf Foundation.