A quest to drug the undruggable 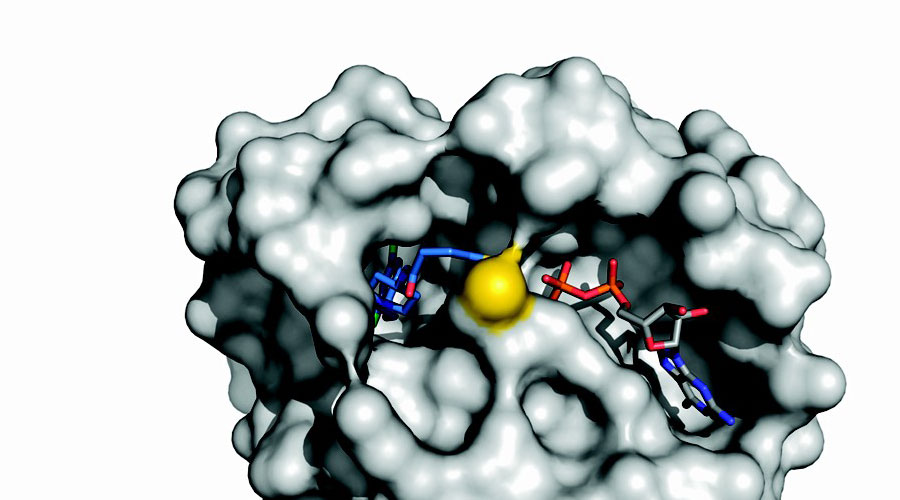 Undruggable – The latest Stereo Chemistry episode explores why certain drug targets are so vexing, and the cutting edge approaches chemists are taking to finally crack them

JUNE 20, 2018 | APPEARED IN VOLUME 96, ISSUE 26
Although genome sequencing has helped scientists reveal proteins wreaking havoc in our bodies, that doesn’t guarantee scientists can design drugs to fix them. Depending on who you talk to, up to 85% of the human proteome is currently “undruggable.” These proteins—such as KRas, shown here in gray—lack easy-to-find pockets where therapeutics, such as small molecules, can bind. But a wave of biotech companies, each one armed with new technology, has arrived to tackle the problem. Industry and academic scientists explain why they think the business and scientific environment is ripe for finally overcoming the most elusive drug targets.
Credit: Kevan Shokat

Bill Clinton: Genome science will have a real impact on all our lives. And even more, on the lives of our children. It will revolutionize the diagnosis, prevention, and treatment of most, if not all human diseases.

Lisa Jarvis: Hey, Matt. And I definitely will explain, but could you finish the quote first?

Bill Clinton: In coming years, doctors increasingly will be able to cure diseases like Alzheimer’s, Parkinson’s, diabetes, and cancer by attacking their genetic roots. In fact, it is now conceivable that our children’s children will know the term “cancer” only as a constellation of stars.

Lisa: That was a press conference in June 2000 to announce the completion of the mapping of the human genome.

To get nitpicky for a minute, the genome wasn’t fully, 100% mapped until 2003, but they had figured out the most important bits by 2000. At that time, researchers thought knowing a person’s genetic blueprint would tell us everything we needed to know about the proteins in a person’s body that malfunctioned in a disease. And that those proteins would lead us to treatments. But we’re now 18 years out from President Clinton’s press conference, and, well, there’s still a lot of work left to do. None of those diseases that he ticked off has been cured.

There’s a whole host of reasons why we haven’t cured all diseases. Understanding the complex biology of various diseases has been hard. And doing the chemistry to make drugs that safely and effectively promote healthy human biology? Also super hard. Even in this era of rapid and affordable genome sequencing, we still come up against one big problem. Knowing the genetic driver of a disease, say, a certain type of cancer or an inherited neurological condition, does not mean we know how to develop a treatment for the disease.

Most conventional drugs —small molecules and antibodies—target proteins to treat diseases. It turns out that there’s a ginormous swath of proteins that conventional drugs simply can’t access. Depending on who you ask, that swath includes up to 85% of our proteins. Scientists have a name for this hefty chunk of the human proteome: quote unquote undruggable targets.

This episode of Stereo Chemistry is all about “the undruggables.” Remember, they’re proteins we can’t drug now. So undruggable targets present a huge opportunity for biotech companies and investors. In the last two years or so, people have poured hundreds of millions of dollars into firms developing molecules to drug the undruggable. These companies are taking a range of approaches, but they’re all making some version of the same claim: that they will be the one to first defeat the undruggables.
Matt: Coming up, we’re going to explore why some drug targets are so darned vexing. And of course, we’ll look at some of the chemistry that could finally crack these targets. Lisa spoke with researchers from industry and academia to learn what they think are the most promising approaches. From drugging the machinery that makes the proteins to better understanding the proteins themselves.

And be sure to stick around ‘til the end of this episode, when we’ll unveil the very first installment of the Stereo Chemistry Book Club. Lisa will be joined by a special C&EN guest to discuss the book that is taking the biotech world by storm: John Carreyrou’s “Bad Blood.”

But first, Lisa, I have to ask. How can people spend all this time and money going after these targets while, at the same time, refer to them as undruggable?

Lisa: Good question. It turns out to be a word that elicits some pretty strong reactions.

Angela Koehler: I hate that term. I’ve hated it for the last ten years.

Michael Gilman: So I don’t like the word, because I think it’s a self-fulfilling prophecy. If you think it’s undruggable, you don’t try to drug it.

Dan Nomura: I think 50–100 years from now, there will be no protein that is undruggable. Everything will be druggable.

Lisa: Okay, so undruggable isn’t everybody’s favorite word. And many agree on their dislike of it. Some prefer “recalcitrant.” Others say “intractable.” Some just refer to difficult or tough targets.

Whatever we call them, researchers agree that we probably want to shrink down our definition of “undruggable” from the general 85% of the human proteome that we currently can’t access to focus only on the portion of the proteome that’s worth chasing. As one researcher told me, we need to focus on the things that are desirable to drug, not just difficult to drug.

The next general point of agreement is what it means to be “difficult to drug”. Actually, let’s back up a minute and talk about what makes something easy to drug. Or, at least, what’s possible to drug. So far, most drug design success stories have targeted molecules like membrane receptors, kinases, or other enzymes that are in the business of binding ligands. Those targets tend to have nice, well-defined pockets for ligands to nestle into. Chemists have gotten really good at designing therapeutic compounds that can park in these pockets like the natural ligand. It’s when proteins lack an obvious toehold that researchers start sweating. That’s when a protein can look undruggable.

No target more aptly fits into that undruggable description as the one that tops basically every drug hunter’s wish list.

Kevan Shokat: Yeah, I would start with KRas.

Rosana Kapeller: My personal nemesis target is KRas. Did you watch Star Trek? I don’t know if you remember the Borg ships, but there is no place to get into the ship. There’s no receptor site for a small molecule on the surface of KRas.

Lisa: KRas is one of the most commonly mutated proteins in cancer. Researchers are confident that if they could just block its activity, they would be able to help a lot of people. Yet it seems to be the perfect prototype of the undruggable protein. Chemists have been working on defeating that cancer villain for a good 35 years.

With conventional chemistry not really panning out for “undruggable targets” like KRas, people started looking beyond small molecules to things like gene and cell therapies and oligonucleotide drugs.