Where the life sciences are concentrated 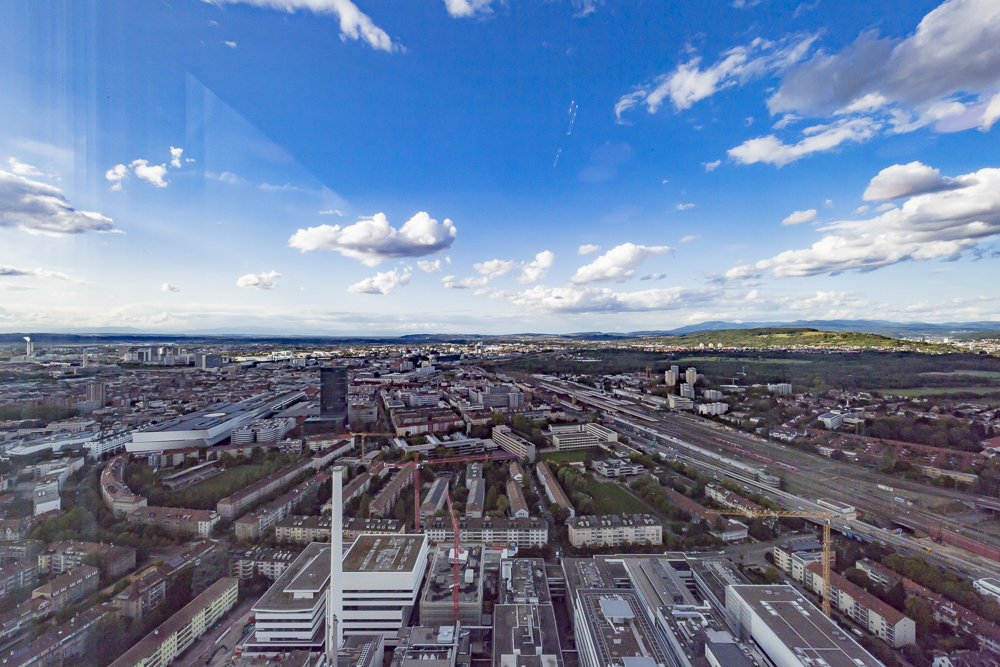 As one of the world’s leading locations for life sciences, the Basel region is home to a cluster of companies and organizations that not only compete with one another but also engage in cooperation. These are the findings of a new research study in the field of geography.

The view extends over Basel and far beyond. On his geography field trip on the history of life sciences in the region stretching back over 500 years, doctoral student Thomas Vogel stands atop Roche’s “Building 1” office tower and talks about the influential apothecaries’ guild of the Late Middle Ages, as well as the humanist anatomists and printers that spread the city’s medical and pharmaceutical expertise far and wide. When religious refugees, innovators, and later industrialists from France came to the region, they spurred on its development: from dyes for the silk ribbon industry to chemistry, pharmacy and the life sciences.

The immigrants brought with them expertise, capital, and business relationships, which would then combine with Basel’s own entrepreneurial spirit and local capital. Over the years, hundreds of large and small businesses have arrived on the scene: specialist suppliers and companies working in research and development, production, sales, and consulting in areas such as textile chemistry, pharmaceuticals, medical engineering, biotechnology, and agrochemistry. The city’s location on the River Rhine was convenient for production, transport, and the discharge of effluents.

What are the beneﬁts of a cluster?

Speciﬁcally, her doctoral student Thomas Vogel is studying the advantages for companies of locating themselves in the Basel Life Sciences Cluster, as well as the sectoral and corporate structures and interconnections that the cluster produces. To this end, he has surveyed 766 life sciences companies in the region, achieving a response rate of 20.2%.

In general, the companies consider the conurbation a good place to do business: of six inﬂuencing variables, those most frequently cited as positive were the supporting infrastructure, residential and leisure amenities, and transport infrastructure. On the other hand, their response was less positive in relation to the availability of highly skilled local workers, for example, which leads the companies to recruit skilled workers internationally.

Using what is known as a geographical information system (GIS), Vogel is creating the ﬁrst comprehensive overview of the life sciences cluster by sectoral, corporate and spatial structure. The companies are concentrated geographically in the cantons of Basel-Stadt and Basel-Landschaft, with the most important industry being the pharmaceutical industry, followed by medical engineering and biotechnology. It is clear from the analyses that the region is a research-intensive location – but also that manufacturing continues to play a key role. The geographer sees the high concentration of companies relative to the size of the city as a distinguishing feature of the Basel Life Sciences Cluster.

Text with courtesy of the University of Basel where it was first published in the magazine “Uni Nova”. Author: Christoph Dieffenbacher

A lack of patent law

In France, a patent law had existed for chemical products since 1844, providing protection not for the chemical manufacturing process or the inventor, but rather for the manufacturing company and the product itself. Many inventors, therefore, emigrated to Basel, where products patented abroad could still be manufactured until the advent of the Chemical Patents Act in 1907. Initially, the companies established here operated as conglomerates that had evolved over many years. A series of subsequent mergers and spin-offs led to more focused lines of business. With Novartis and Roche, Basel is now home to the world’s second and third-largest pharmaceutical companies in terms of revenue.

A cluster is deﬁned as a local concentration of similar enterprises. This situation can lead to innovation and competitive advantages, as well as providing a boost to the regional economy, as highly specialized companies often choose to establish themselves only in certain regions despite the possibility of opening locations worldwide. “The choice of location is, therefore, an important area of geographical research, typically yielding new insights for the promotion of locations and regional development,” explains Rita Schneider-Sliwa, Professor of Geography.

In conclusion, the study reveals pronounced cluster formation that has its origins in long-standing, historic traditions – and that today builds upon the positive overall assessment of the Basel region as a place to do business. Numerous soft location factors also play a role here. By contrast, opinions were less positive with regard to factors arising in part from the discretionary scope of policies geared toward a knowledge economy, such as the lack of local skilled workers that companies complained about in the survey.

“Research findings like these support efforts to adapt training structures to the specific needs of the labor market and develop them on an ongoing basis,” Vogel says in relation to his work. In his view, this also applies to plans to create new centers – such as the University of Basel’s Life Sciences Campus – that will make this an even more attractive location for research.

Cooperation within the network

In addition to the supply of international skilled workers, the perceived beneﬁts for companies of a location in the Basel cluster include the opportunities for collaboration and informal contacts. Through a network analysis, Vogel is examining the question of whether and how companies, institutions, and organizations within the cluster are interconnected in terms of business and research relationships.

What is noticeable here is that the University of Basel together with its partners and associated institutions (Biozentrum, University Hospital Basel, University Children’s Hospital Basel, Swiss TPH, FMI) play a central role in the life sciences research network (without including Roche and Novartis) and account for 48% of all collaborations.

Where the companies in the cluster have Twitter accounts, Vogel has studied them to see who refers to whom as a follower. As expected, this again revealed a clear process of clustering: “The large companies have the most followers within the cluster and therefore play a key role in communication, as well as enjoying greater reach,” says the researcher.