A factory no bigger than a molecule, now producing fuels, chemicals and materials 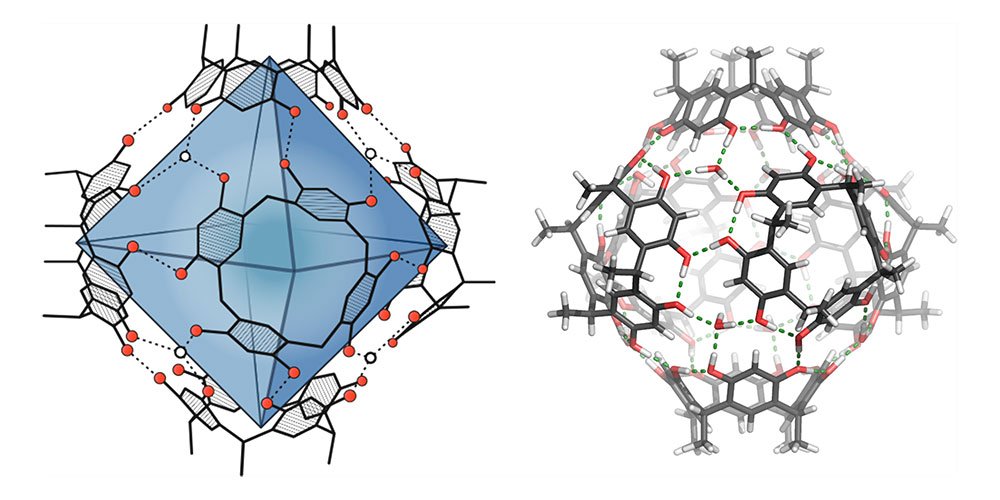 An article by Jim Lane, published by BiofulesDigest

A team from the University of Basel, Switzerland has come up with a black box the size of a molecule, and inside that box they can generate the precursors for fuels, pesticides and face creams with astonishing yields and simplicity.

Specifically, they are making compounds that within the 50,000-molecule group known as terpenes — and if you’ve smelled a pine tree lately, that’s a terpene your nose is picking up. They’re using a spherical compound known as a resorcinarene — which we’ll mention once before we condemn it to the Hall of Shamefully Named Useful Molecules and refer to it from this point forward as the Box.

What they are doing

The research group led by Professor Konrad Tiefenbacher from the University of Basel’s Department of Chemistry has now developed a synthesis concept for terpenes copied from nature.

The decisive step takes place in the cavity of a spherical compound – known as a molecular capsule. The resorcinarene capsule used has been known about for around 20 years but its catalytic effect has only very recently been described, by Tiefenbacher and others. In organic solvents, the capsule forms itself from six smaller, ring-shaped compounds with the help of hydrogen bonds.

In a similar way to nature, the researchers led by Tiefenbacher begin with a starting material for the synthesis, which is enclosed by the capsule. The capsule environment then enables the formation of the terpene. In addition, control elements previously integrated into the precursor help avoid unwanted side effects and direct the transformation towards the desired product.

What it’s used for now

The compound they made in this proof of concept is Isolongifolene, which has woody and amber scents, and is widely used in a range of applications, including as this catalogue suggested, “fragrances for cosmetics, perfumers, space sprays, detergents, deodorants, fabrics, fibers, and soap, tobacco, creams, paper products. In addition, a melanin inhibitors in plants and animals,” and potentially for “regulating fertility, preventing, and treating breast cancer, and for menopausal hormone replacement.”

The applicability of the concept was proven by the four-step synthesis of isolongifolene, with the formation of a ring-shaped terpene compound catalyzed by the capsule as the key step. This succeeded – when compared with conventional syntheses – in significantly fewer steps and with a good yield. Using labeled precursors and with the help of computer simulations, the Basel chemists were also able to clarify the reaction mechanism.

Terpenes are natural products that are often very difficult to synthesize in the laboratory. They include, for example, many essential oils, steroids and clinically relevant substances such as the antimalarial drug artemisinin or the chemotherapy medication paclitaxel. And a whole bunch of candidate fuels — and we covered many of those right here. And much of what Evolva is up to with new compounds like nootkatone, and just about anything that has come out of the Amyris shop is grounded in terpene science.

Amyris’ process makes farnesene at high yield. But generally, speaking, terpene production is a world of low-yields, and the process often requires numerous, not always selective synthesis steps, and the yields tend to be low. And that generally has confined most affordable applications to the high-end range where pharam and cosmetics sit. Big-market chemicals — and especially fuels — they are a prized application set that the economics don’t yet favor. $75 oil helps, and $200 oil (if it appears, as was predicted for 2020), would put a whole bunch of technologies into the fuel range.

But a manifestly improved process would help more, And that’s what we’re looking at here.

Like low-carbon fuels? Terpenes would be your new best friend. As we reported in 2016, researchers from the Australian National University said that eucalyptus-based fuel would initially be more expensive than fossil fuels to make on a mass scale, but would produce significantly less net carbon emissions.

Certain monoterpenes commonly found in eucalyptus oils such as pinene and limonene, can be refined through a catalytic process, resulting in a fuel with energy densities suitable for jet fuel.

Terpenes are so good a s a fuel, they’re far better than conventional jet fuel. Meaning they can fly farther or carrying bigger payloads than aircraft using conventional kerosene fuels. We’ve seen research suggesting that you could load an extra air-to-surface missile on an existing aircraft. That means fewer pilots flying the same mission. Using less to do the same job is a good formula for military and just about anything else.

What about pest control?

If fuels seem far out, a transitional application — that is, bigger markets than cosmetics but higher prices than fuels — could well be insect control.

As the Hindawl reported here, “essential oil components such as terpenes and phenylpropenes have been shown to have a significant potential for insect control.” That’s something Evolva is looking into with Nootkatone — and probably everyone knowns that you use orange-scented terpenes to ward off insects near your summer campsite.

What you see here are two different representations of the molecular capsule being used: on the left, the around 1.4 cubic nanometer-large cavity is highlighted in blue. On the right, the cohesion of the capsule via hydrogen bonds (green dashed lines) is visible.

“Our next goal is to use capsules as an artificial enzyme in the creation of even more complex terpenes,” says Professor Tiefenbacher. “In order to do so, we must learn to better control the spatial arrangement of the precursor within the capsule, either by modifying the existing system or by developing new catalysts.” This may open up new ways of synthesizing terpene compounds that would otherwise not be readily accessible.

The findings were recently published in the journal Nature Catalysis.